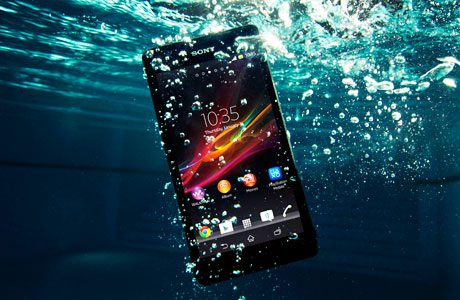 Sony has announced a waterproof Android smartphone with a 6.4in screen (16.3cm).

The firm is pitching the Xperia Z Ultra as being the slimmest large-screened handset on the market.

It can also accept sketches or notes written using a standard pencil or metal-tipped pen in addition to an optional stylus.

The firm says it intends for the device to challenge Samsung’s dominance of the jumbo-sized handset sector.

According to a study by consultants Transparency Market Research, Samsung accounted for 70% of the overall “superphone and phablet” market in 2012 thanks to the popularity of models including the Galaxy S3 and Galaxy Note 2.

Earlier this year, it added the Galaxy S4 and Galaxy Mega – a 6.3in-screened handset – to its line-up.

Sony already offers a 5in handset of its own, the original Xperia Z, which it unveiled in January.

The Ultra follow-up was unveiled at the Mobile Asia Expo in Shanghai. The new device will go on sale in China, Indonesia and Singapore in July and August, and then in Europe from September.

“Southeast Asia is the key market for the product because the trend towards large-screened smartphone devices is stronger there,” Calum MacDougall, director of Xperia marketing, told the BBC.

“But we also see the trend in Europe as well.

“In the large-screen segment at the moment most consumers are looking at the Galaxy Note. Now we can offer something that is really distinct: a stronger screen, greater portability, waterproofing and something different around the stylus and the pen.”

Sony is not alone in seeking to erode Samsung’s lead.

Over recent months Huawei has announced the the 6.1in Ascend Mate; ZTE the 5.7in Grand Memo; Acer the 5.7in Liquid S1; Asus the 6in FonePad Note; and Lenovo the 5.5in Ideaphone K900.

Mr MacDougall said Sony intended to compete against these by promoting the Xperia Z Ultra’s “premium” features rather than trying to match or undercut the Chinese and Taiwanese firms’ prices.

The Japanese firm reported its first annual profit in five years in May, but some analysts said its figures were skewed by asset sales and did not reflect a turnaround for its electronics divisions.

The Xperia Z Ultra is 6.5mm (0.26in) thick – only slightly deeper than the thinnest device on the market, Huawei’s Ascend P6

Unlike the original Xperia Z the new phone does not need a flap over its headphone socket to protect it from water damage, addressing complaints the feature was fiddly to use.

Those concerned about using such a big device for quick tasks are also offered an optional bluetooth add-on which can be paired to the handset using NFC (near field communication) to make calls, view text messages or stream music.

The accessory is similar to the HTC’s Mini accessory announced in January for its 5in Butterfly handset.

Transparency Market Research said that over 150 million Android super-sized phones were sold in 2012 and predicted the market would grow to 400 million by 2018.

Another consultancy firm, Frost & Sullivan, agrees that demand for such devices appears to be robust despite the fact many users would struggle to use them unless they had both hands free.

“For many people in developing parts the phablet is their first communications and computing device and allows them to have a single machine rather than multiple ones,” the firm’s managing director Manoj Menon told the BBC.

“But going forward companies are going to find it increasingly hard to differentiate between their products on size – it will have to be on software and other features. So, Sony seems to have the right strategy at this time.”