Want to Buy a Computer for Gaming?

When you’re playing a fast-paced game with detailed graphics, where split-second decisions mean a win or a loss, if your computer isn’t up to par, all is lost. A gamer is only as good as his computer’s hardware. Gaming computers can process huge amounts of information while playing online role-playing games or first-person shooters. These powerful gaming computers come with high-end graphics cards and lightning fast CPUs, and in many cases they use liquid cooling.

Gaming computers like the CyberPower Black Pearl, the Digital Storm Hailstorm and the Velocity Raptor Signature Edition are equipped with numerous ports, including USB, FireWire, headphone and microphone ports on the front of the tower. This makes it easy to plug in all your peripherals, such as joysticks, steering wheels, headsets and other gaming devices. These are not your typical desktops. Gaming computers incorporate style and in some cases portability. Towers may have transparent sides, neon lights or innovative designs so they look as great as they perform.

Gaming PC: What to Look For

Gaming computers have high-end graphics cards, processors and more than enough RAM – all the components needed to enhance your gaming experience. When you’re considering a gaming computer, carefully evaluate your needs. Most manufacturers provide individual customization, so you can get a desktop that will fit your gaming style and budget. Below is the criteria TopTenREVIEWS used to evaluate gaming computers.

Video & Audio
A game is only as good as the video card supporting it. Many games have life-like, real-time images that require a powerful video card. ATI and NVIDIA graphics cards are the most common amongst gamers, and at least 1GB of proprietary video RAM will get the job done for most high-end games. A gaming computer sound card, integrated or not, is capable of reproducing 5.1 or 7.1 channels of sound, so you will be able to tell where your enemies are located.

Processor
A fast CPU, or processor, will aid the video card in drawing billions of polygons per second in first-person shooters and MMORPGs (massively multiplayer online role-playing games) alike. The best systems will include a powerful quad-core or six-core processor.

Memory & Storage
Large amounts of memory allow the computer to quickly access frequently used information or programs – critical components for gaming. A gaming computer should have at least 6GB of RAM and sufficient hard drive space for multiple games to be installed on the system. Some games can occupy over 35GB of hard drive space. Over the past year or two, it has also become very common to use a SSD (solid-state drive) for programs and software such as the operating system. Because SSDs have no moving parts, they are quieter and generally faster than their hard disc drive counterparts. 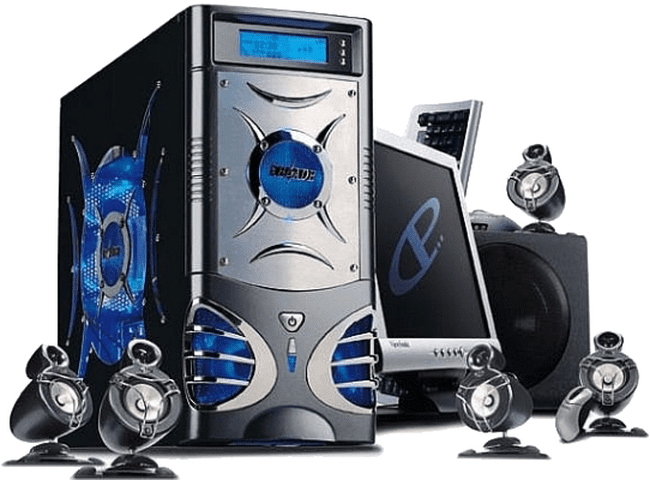 Some computers come with peripherals such as a mouse, keyboard, speakers and a monitor, while others don’t. This may or may not be important depending on your needs. Additionally, some gaming systems come with uniquely designed towers with custom paint and neon lights. Windows 7 is a must for any system, and you’ll want at least one high-speed optical drive.

Support & Warranty
The first-class manufacturers provide quality help and support through email, phone, online chat, a community section and a FAQs page. They also provide a warranty of up to three years at no additional cost.

As you can see, quite a few things make a gaming computer more than just another home office machine. Many of our top-ranked products exceed the expectations we set, which makes them some of the top gaming computers on the market.