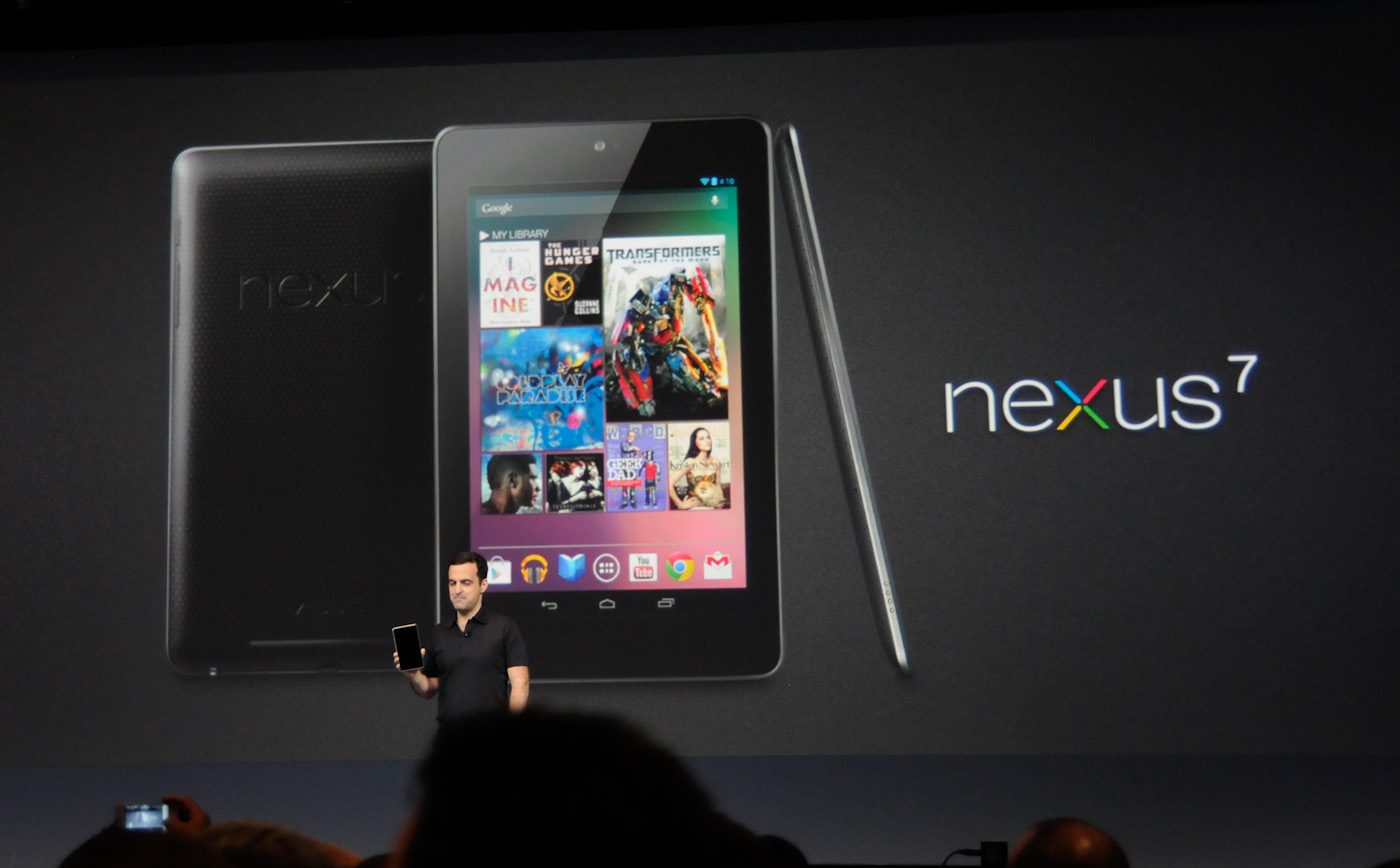 The best small tablet gets even better

The bad: The back is missing the soft grippy texture of the original, screen colors lack accuracy, and there’s no microSD support. Android 4.3 has few useful interface improvements.

The bottom line: Thanks to its stellar performance and affordable price, the Nexus 7 is the Android tablet to get.

Pound for pound, the Nexus 7 is the best small tablet you can buy. It houses a ridiculously sharp, bright screen, its gaming performance is second only to the fourth-generation iPad, and as a Google-branded tablet it will always see the latest version of Android before any other tablet brand.

Also, at $230 (for 16GB), it’s still an affordable tablet with one of the highest values in the market, despite a $30 price hike over the previous tablet. The $270 32GB Wi-Fi model and $350 4G LTE version are even better values, especially compared with similar configurations of the iPad Mini.

Yes, it’s not as cheap as some of the top small tablets from 2012, its screen isn’t as big as the iPad Mini’s, and Android 4.3 lacks a few useful UI features Samsung plugged into its Galaxy Tab 3. However, those are only nitpicks considering the Nexus 7’s sharp-as-nails screen and blazingly fast performance. Despite its imperfections, it’s the first small tablet I’d recommend and is the current best tablet value around.

Design
At 0.64 pound, the Nexus 7 is the lightest tablet yet and with a 4.5-inch width when held in portrait orientation, it’s probably the easiest to fit in one hand. It’s an extremely simple design, black in color and honestly lacks much in the way of panache. It’s a harsher tablet compared with the original, and I miss the 2012 Nexus 7’s soft, much more inviting feel.

The smooth matte finish of the tablet’s back isn’t as comfortable or as grippy as the soft leathery back of the 2012 Nexus 7. Also, the new tablet’s corners aren’t as pleasantly rounded and the Micro-USB port on the bottom edge sticks out just enough to be distracting when held in landscape mode.

This hopefully gives you an idea of the texture difference between the old and new Nexus 7.

The top and bottom bezels span about an inch in length each and the side bezels are even more compressed than the original’s; however, despite their more slender turn, errant screen taps don’t appear to be a problem.

Along the right edge are an easy-to-find power/sleep button and volume rocker, and there’s a headphone jack on the top edge. A front-facing camera sits on the top bezel toward the right corner and the rear camera rests behind on the backside, nestled deep in the left corner. Also on the back are two sets of speaker grilles; one near the top and another on the bottom, next to the Micro-USB port.

Software features
The Nexus 7 ships with the very latest version of Android (4.3) and to be quite honest, the OS isn’t much different from the previous incarnation (4.2.2). At least not obviously so. For a detailed look at the updated OS’ features, check out our Android 4.3 review.

One of the few notable Android 4.3 additions is the Multi-User Restricted Profiles feature, which allows you to set up accounts with extremely limited access.

The notable new features are Multi-User Restricted Profiles, OpenGL ES 3.0 support, and Bluetooth Smart. User profiles were introduced with Android 4.2, and the latest version allows you to add a kid-friendly profile that the primary profile controls. The restricted profile will only have access to apps deemed acceptable and will have no access to the Play store. An ideal solution for families wanting to share a single tablet; however, Google leaves the decision of implementing it up to the developer.

OpenGL ES 3.0 improves polygonal graphics performance and allows the tablet to better handles effects like lens flares, shadows, and other shader effects. With Bluetooth Smart, the Nexus 7 can connect to a newer generation of Bluetooth devices as well as transmit metadata like song titles.

I’m a huge fan of close-up pics of tablet buttons. Actually, I’m not, but I liked this particular pic so much, I married it. That’s also not true.

The other 4.3 changes are minor or so deep into the back end that most people will never notice the difference. It’s certainly not as satisfying a leap as 4.1 to 4.2 was, and we’ll likely have to wait until Android 5.0 to get some really meaty and truly exciting software upgrades.

Hardware features
The 7-inch Nexus 7 houses a 1.5GHz Qualcomm Snapdragon S4 Pro system on chip with a quad-core Krait CPU and a single-core Adreno 320 GPU. It has 2GB of RAM and includes support for 802.11 a/b/g/n (2.4GHz and 5GHz) Wi-Fi, Bluetooth 4.0 (including Bluetooth Smart support), and a GPS. Additionally, a gyroscope, accelerometer, and a digital compass are included as well.

The Micro-USB port doubles as an HDMI port, as long as you have the required (costs about $30) adapter.(Credit: Josh Miller/CNET)

The tablet supports SlimPort, which allows you to use the Micro-USB port as an HDMI port via a $30 adapter, but there is no physical HDMI port on the Nexus 7.

NFC support returns, and we also get wireless charging, which according to Google will allow any Qi-compatible charger to fill the Nexus 7’s battery. And that does indeed appear to be the case, as the Nokia Lumia DT-900 wireless charger worked without issue; however, the actual charging speed was painfully slow compared to a wired charge.

Performance
First things first, the Nexus 7’s screen is incredibly sharp and text is particularly fine and easy to read. You may not fully appreciate its high pixel density immediately, but when looking at it next to almost any other tablet screen, the Nexus 7 clearly comes out on top. It’s also one of the brightest tablet displays I’ve ever seen. Colors are more accurate and fuller compared with the 2012 Nexus 7 and the contrast ratio is noticeably higher. Viewing angles are wide and images appear to have a fuller, more corporeal integrity.

Behold the beauty of the Nexus 7’s razor-sharp screen.However, despite its color improvements, the 2013 Nexus 7’s screen doesn’t represent color as accurately or vibrantly as the 8-inch Samsung Galaxy Tab 3’s, though the Tab 3’s screen isn’t as sharp. The Nexus 7’s screen looks comparatively greenish when looking at pictures or movies of faces and sometimes pushes purple when lots of bright colors are in the mix. Most won’t notice, but it definitely stands out with the two tablets side by side.

The screen responds immediately to touches and apps whiz by as fast as you can swipe them. Switching between different apps quickly and scrolling through Web pages is as smooth and zippy as I’ve ever seen on any tablet. However, the interface has its fair share of Android wonkiness; over the course of several hours I experienced a few hangs, an unresponsive screen, and a keyboard that simply didn’t want to go away. These problems were easily fixed with a quick sleep mode and back induction, though.

Wi-Fi speeds were consistently high with no spotty connection issues when within a reasonable distance from our internal network. The Nexus 7’s battery lasted throughout the day while downloading apps, surfing the Web, and receiving plenty of notifications. It also dropped only nine percent after an our of video play, whereas the 2012 Nexus 7’s battery depleted by 13 percent running the same video over the same duration. Look for official battery life results as soon as we’ve had a couple of days with the device.

A serious pusher of polygons
Next to the fourth-generation iPad, the Nexus 7 is the fastest tablet I’ve seen at running polygonal games. Real Racing 3 and Nova 3 looked particularly impressive with smooth frame rates and sharp graphics with minimal aliasing on edges; however, like on many other Android tablets, Real Racing 3 loses its rearview mirror feature on the Nexus 7.

The best-performing small tablet for gaming. ‘Nuff said. Well, I actually do say more in the paragraph below.

Riptide GP 2 is an incredibly impressive game with lots of customizable graphical effects options and even with its effects tuned to maximum, the Nexus 7 delivered smooth gameplay at more than 30 frames per second that many times looked to approach and hit a full 60 fps. This easily and consistently bested the Nexus 10 in its presentation.

Oh, tablet cameras. Will you ever provide any real value?

The Nexus 7 continues the tablet trend of placing mediocre shooters on their bodies. Both the 1.2-megapixel front camera and 5-megapixel back camera make faces look greenish and sickly in pics, and while each picks up a bit more fine detail than most tablet cameras, shadows look dithered and blurry.

The dual speakers are above average quality for a tablet, but don’t get as loud or sound as full as the 2012 Kindle Fire HD’s, which are still the best tablet speakers in the market. They’re not bad by any means, but they will do nothing to change your perspective on tablet speakers. I used ‘The Avengers’ from the Play store to test the surrounds sound. The effect is convincing, but to be honest, prefer using earbuds when watching movies and TV shows on tablets.

Yet, there are still alternatives
As good as the Nexus 7 is, it may not be for everyone as different users have varied tablet needs.

The original Nexus is now available for as low as $150.

The 2012 version of the Nexus 7 is still a great tablet supported by the latest version of Android and starts now at $150 (at Walmart). The Nook HD is $130 (though it’s being phased out), and the 2012 Kindle Fire HD, which features better speakers despite Google touting the Nexus 7’s surround sound setup, is the best choice for Amazon Prime users and still starts at $30 less.

The Samsung Galaxy Tab 3 has a more comfortable design, it’s screen handles colors more accurately and vibrantly, it includes storage expansion, and some of its UI interface conveniences surpass even what Google’s been able to implement so far. However, the Tab 3 will cost you $70 more at starting prices. The new Nexus 7 trumps the iPad Mini’s screen in every way aside from size and has faster gaming performance, but the Mini still has access to many more apps and most major game releases debut on iOS first, although simultaneous releases are becoming more common.

Conclusion
The Nexus 7 (2013) easily supplants the original model as the small tablet of choice. It may not be quite as comfortable to hold, but its heavily increased performance, razor-sharp screen, additional features, and all that Android 4.3 brings in tow more than make up for a harder, less grippy back.

At $230, it’s more expensive than the top 7-inch tablets from 2012, but it’s also much better-performing. In addition, it’s cheaper than both the 8-inch Samsung Galaxy Tab 3 and the iPad Mini and yes, performs better than either, despite the former’s better handling of onscreen colors.

While it doesn’t obliterate the competition, the Nexus 7 has enough improvements to earn the small-tablet crown and is the next best choice to the full-size iPad.