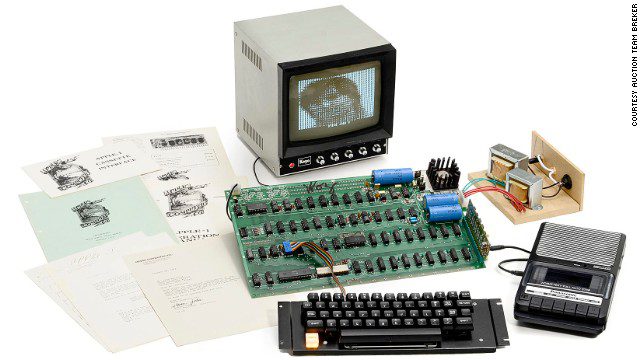 (CNN) — A rare working model of the Apple 1, the tech giant’s first desktop computer, sold for more than $671,000 over the weekend at an auction in Germany.

The computer, along with a letter from Apple co-founder Steve Jobs to its original owner, is believed to be one of only six working Apple 1s and one of only three on the open market.

The buyer, who chose to remain anonymous, is from the Far East, according to Uwe H. Breker of Auction Team Breker, which auctioned off a roster of vintage tech Saturday in Cologne.

“It’s not only the technology of the world’s first ready-to-use PC,” Breker said in an e-mail to CNN. “It’s more the symbol of the American Dream — the story of two drop-outs who had a superb idea … and 35 years later their company is the richest and highest-valued company ever.”

Jobs and Steve Wozniak famously created the Apple computer in Jobs’ family garage, building the device by hand and financing the company through the sale of Wozniak’s fancy calculator and Jobs’ VW camper van.

About 200 Apple 1s were built, and fewer than 50 are believed to exist still — most of them not in working order.

Saturday’s lot also included the letter from Jobs to a Fred Hatfield at Computer Data Systems in Columbus, Ohio. Dated January 18, 1978, the letter offers Hatfield the chance to trade in his Apple 1, and $400, for an Apple II. He obviously did not take Jobs up on the offer.