How To Fix and prevent Laptop Overheating

Identifying an Overheating Laptop and Why You Should Fix it

Any time we’re using our laptops, they’re sucking in dust and lint, so it’s the least we can do to try and be conscious of how and when we’re using out laptops. For starters, you’ll probably notice that your laptop has vents on the bottom for pulling in air (about 95% of laptops do). If you use your laptop on your lap or some other cloth surface, it not only blocks these vents, reducing airflow, but it also introduces a lot more lint.

It’s also very helpful to turn your laptop off (or at least put it to sleep) when you aren’t using it. Just turning your laptop off at night can reduce the amount of dust it takes in by 33%, compared to leaving it on at all times.

Lastly, and it may seem cruel, pets are one of the leading causes of gunk buildup in laptops. Now, this doesn’t mean you have to get rid of your pets. Just try to keep them away from your laptop, and avoid using your laptop on or near places your pet sleeps.

Identifying an overheating laptop isn’t particularly difficult. If you find your laptop randomly turning off (especially during periods of demanding use) and various parts feel hot to the touch, as-in too hot to comfortably hold your finger against, it’s probably overheating. If your laptop is still covered under warrantee, this is a problem for the manufacturer to take care of; however, through normal use, it isn’t unusual for laptops to become gunked up with dust and lint, generally around the time that the warranty expires.

An overheating laptop can also be dangerous. Those Li-Ion batteries don’t respond well to hot environments, and using your laptop on your lap can even result in burns. If parts of your laptop are hot enough that it’s painful to hold your hand against it, you need to do something about it.

Rather than buying a replacement laptop, there are a few simple steps you can take in order to give it a second wind. The following guide will walk you through two methods for cleaning your laptop’s cooling system. One method is extremely simple and non-invasive, and the other is a complete cleaning, best suited for those with some computer hardware experience.

Tools for a Basic Cleaning

A Small Screwdriver for Opening the Back,  Compressed Air Duster,  clean and Organized Workspace, an Anti-Static Wrist Strap (optional but highly recommended), starting off with a basic cleaning only requires a few common tools. Just about any electronics store, such as Frys or Best Buy, will have all of these tools (minus the workspace of course)

Step 1: Opening up Your Laptop 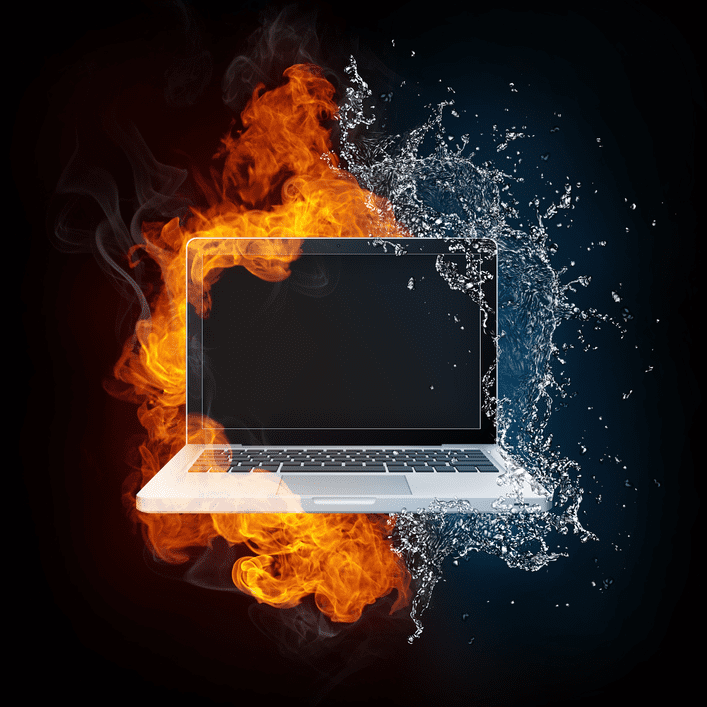 Believe it or not, this is one of the harder steps, simply because laptops come in all sorts of different models. Some are easy to get into, others have hidden screws and latches that could require specialized tools. In most cases, like with this Dell Inspiron, opening the back panel is relatively simple.

First you’ll want to shut down your laptop, unplug it, and remove the battery. If you’re using an anti-static wrist strap, now is the time to put it on and attach it to a ground. If your laptop looks as straight forward as this Dell, odds are it is, but keep in mind that opening it up should not require much prying at all. If it doesn’t seem to want to open, check again for other screws (sometimes located on the sides or even around the keyboard).

Some laptops may prove too difficult to get into. If this is the case, you can still make use of the canned air by blowing it into the various fan vents in attempts to clear out some of the gunk. This is generally sufficient as a temporary fix.

Step 2: Locating and Cleaning Out the Heatsink

Now that you have your laptop open, locating the heatsink should be fairly simple. Modern laptops make use of “heat piping,” copper tubes that channel heat to the heatsink. You should be able to follow these tubes (some laptops have more than one) from the CPU and GPU to the fins of the heatsink.

Using the canned air, blow steady controlled bursts into the heatsink and surrounding area. It’s OK to use your fingers to remove any larger chunks of lint that don’t come out with the air. If your laptop allows you access to the fan as well, you can use the canned air to clean it as well. For the fan though, you’ll want to use quick bursts of air. You don’t want to spin the fan too much or too fast.

If you’re uninterested in the more advanced cleaning directions, feel free to skip ahead to Step Eight.

When lifting off the heatsink, be sure not to bump the base (the portion that contacts the CPU and GPU) against anything. These surfaces are usually designed with microgrooves to help improve contacting surface area. Any nicks or scratches can reduce the cooling efficiency.

Some laptops will have the fan attached to the heatsink. For these configurations, you’ll generally have to disconnect a small power cable running from the fan to the motherboard. Make sure to note where the connectors are so that you can reattach it when you’re finished.

Now that the heatsink is off, you’ll want to give it a good once over with the canned air. Try to get the fins as clear of obstructions as you can. Once it’s cleared of dust and lint, it’s time to clean off all of the old thermal paste.

This is where that plastic edge comes in. Using it, you’ll want to gently scrape off as much of the old thermal paste as possible. Once finished with the plastic edge, it’s time to make use of the denatured alcohol and lint free cloth.

Start by dampening the cloth slightly with the denatured alcohol. You want it damp enough to wipe the heatsink clean, but not wet enough to drip. It will take a bit of work, but you should ideally have virtually all traces of the previous thermal paste removed.

Step 5: Cleaning the CPU and GPU

Just like the heatsink, the CPU and GPU need to be cleaned. This is accomplished in the same fashion as cleaning the heatsink, albeit slightly more delicately. Starting with the plastic edge, gently swipe away the old thermal paste. You’ll be relying mostly on the lint free cloth and alcohol for cleaning the CPU and GPU, so you only need to use the plastic edge to clean off the bulk of the old paste.

After scraping away most of the old paste, give it a quick burst of canned air to get rid of any scrapings left behind. Then, using the lint free cloth dampened slightly with the alcohol, gently wipe away the remaining thermal paste. Once clean, the tops of the chips should have a near mirror finish.

Even though it’s tempting to cake on the thermal paste, it’s actually best to use as little as possible while still covering the whole chip. High-end thermal pastes are designed to work optimally when only thick enough to fill the various microgrooves on the face of the chip and heatsink while remaining just microns thick otherwise.

Reattaching a heatsink is pretty straight forward; however, there are a few details to keep in mind. It’s best to carefully align the heatsink first, before seating it into place. This reduces the chances of smearing the thermal paste. If you bump or lift the heatsink back off of the chips after making contact, you’ll have to go through the thermal paste removal and application process all over again.

Once the heatsink is seated, give it a little wiggle laterally to help spread the thermal paste into all of the microgrooves. After that, it’s time to retighten the screws. Most laptops are designed so that the screws can only be tightened so far, but you’ll still want to be careful not to use too much pressure while tightening them. Be sure to tighten the screws in a crossing pattern, going over each screw several times to insure that they are all tight.

Step 8: Closing up the Laptop

Now it’s time to close up the system. Give everything a good burst of canned air to get rid of any remaining dust and lint. Reattach any cables or connectors that you may have bumped or had to disconnect. Also make sure that all of the wires are tucked away so that they won’t be crimped when you attached the back plate again.

From here out, it’s pretty much just the reverse of opening it all up in the first place. Some systems will have you push the back plate straight down to have it snap into place, while others might require you to start with a corner and hinge it shut. If you’re not sure which way yours closes, just be gentle and try different orientations. As long as you don’t force it, you’ll get it in place eventually.

With everything put back into place, you’re ready to start using your laptop once again. You should see considerable improvements in cooling immediately, with continued improvements over the next several days as the thermal paste settles in.