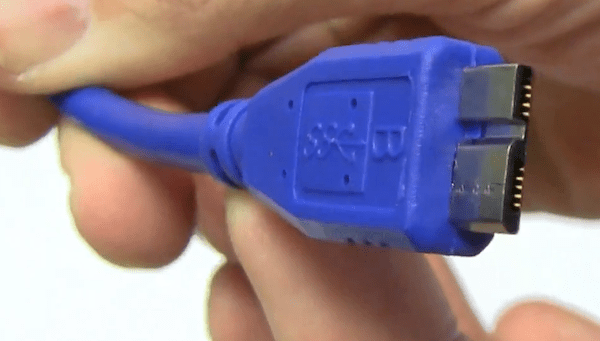 A major revamp of the ports and cables of the ubiquitous connection technology will make USB connectors reversible, slimmer, and better at transmitting data and power.

It can take a little concentration to figure out which way is up when using a USB port such as this one on a MacBook Air; the Thunderbolt port to the right is keyed to make orientation a bit easier. A new USB connector on the way will be reversible so it won’t matter which way people plug it in.

The group behind the USB standard has begun work on a new connector that’s designed to fix a two-decade-old problem: it can be hard to tell which way is up.

The Type-C connector will make Universal Serial Bus more like Apple’s Lightning connector, which is used on newer iPads and iPhones. With it, customers don’t have to make sure the connector is flipped upside-down compared to the port.

USB is burdened by a variety of different connectors today, meaning that customers often must have the right cable to plug in the right camera, external hard drive, phone, printer, or thumb drive. But the Type-C connector is designed to sweep away all these predecessors with a single, all-purpose port.

“This new industry standards-based thin connector, delivering data, power and video, is the only connector one will need across all devices,” Alex Peleg, vice president of Intel’s Platform Engineering Group, said in a statement. “Intel is excited to see the development of the new thin Type-C connector as it will enable an entirely new super thin class of devices from phones totablets, to 2-in-1s, to laptops to desktops and a multitude of other more specific-usage devices.”

That’s significant, given that the arrival of the higher-speed USB 3.0 technology has brought even more cables and connectors to market. Potentially confusing to people, one of these connectors looks identical to old-style USB connectors except that its interior plastic is blue.

However, we won’t know what it looks like until next year.

“Unfortunately, we are not yet ready to share illustrations of the proposed new connector,” Brad Saunders, chairman of the USB 3.0 Promoter Group, said Wednesday in an e-mail to CNET. “At this point, we are still in the process of selecting between a couple of alternatives so it would be premature to share something that might be a bit misleading.”

The new Type-C connector also will bring other improvements when the specification is finished in mid-2014, the USB Implementors Forum announced (PDF) on Wednesday:

• A small size, comparable to the USB Micro-B connector that’s commonly used to charge mobile phones. That’ll make it fit more easily not only on mobile devices but also on ever-thinner laptops, flat-panel TVs, and other space-constrained devices.

• A design that will accommodate faster data-transfer rates of the future. Today’s USB 3.0 reaches 5 gigabits per second, but the USB oversight group has finished the USB 3.1 specification that extends to 10Gbps.

The new USB connector is an “entirely new design tailored to work well with emerging product designs,” the USB-IF said.

The arrival of USB 3.0 has meant even more types of USB connectors, including this USB Micro-B connector. A new Type-C standard is intended to sweep away all the variation with a single connector type for all purposes.

Updated at 6:49 a.m. PT and 11:29 p.m. PT to note that the USB group isn’t yet ready to reveal what its proposed designs for the new USB connector actually look like and to clarify that the standard is for PCs as well as gadgets that plug into them.